In Microsoft Windows, there is a folder named Web Folders. This folder is either present from the beginning or can be added by installing the Internet Explorer, version 6 or higher. This folder can have subfolders, the so called web folders. When you create a web folder you assign it a URL which points to a WebDAV service on the network. With this URL Windows can, for example, determine the contents of this folder.

Infopark CMS Fiona provides such a service so that you can access the files stored in the Content Management Server as if they were files in your file system. Apart from a few system-dependent restrictions, you can handle these files just as you would handle any local files. For example, they can be edited, moved, or deleted: 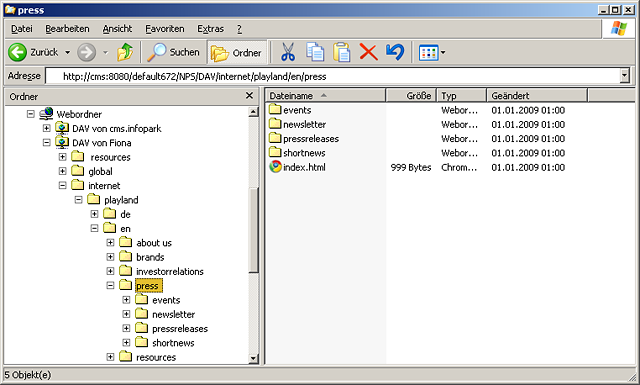 If you would like to access files in the CMS via a web folder, the web folder needs to be created using the Windows Explorer first. To do this and to be able to open this folder, you will need your login and password. Use the CMS URL and append /DAV to it to create the web folder, for example:

After a web folder has been created, you can copy files it contains onto the desktop or into another folder. You can edit the local copy and place it in the web folder again when you finished your work, provided that your permissions are sufficient. Some applications (such as MS Word 2000) allow you to open files directly from the web folder and also save them to this location

Since files in web folders do not have the same properties as files in the CMS, you should keep in mind the following points when you access files via a web folder:

In the following, files in the CMS are called "CMS files" and "CMS folders".

Notes about Use on Windows Server 2003